Does Beef Jerky Need to Be Refrigerated? (Explained!)

We are living in a time with access to all kinds of awesome technology like smartphones and computers. And that makes us kind of oblivious to the technology we’ve known for our entire life, like refrigerators. We take them for granted, but humans have had such an incredibly easy way to store food still only for a while.

Before refrigerators, storing food was an arduous task, and people nowadays know nearly nothing about what things and procedures were used to do it then. There is one relic of those times, though, we all know very well – jerky.

Jerky was invented so that there will be food with a high nutritious value that’ll be able to last for long times. We obviously don’t need that nowadays, but we’re still enjoying the good-old jerky because of its taste and healthy composition. And here comes the thing, the weird relationship between old-fashioned jerky and modern refrigerators.

How can you tell when that is the case? Keep reading, and we’ll answer everything you may be wondering!

Does beef jerky go bad if not refrigerated?

When deciding if you need to put your jerky in the refrigerator or not, the most important thing to look at is whether it was opened or not.

If it wasn’t, there isn’t a reason to refrigerate it at all. As long as your jerky is sealed, it will last up to a year at normal room temperature, and putting it in your refrigerator is just a waste of space.

However, if you have some already opened packages of jerky, refrigerating them seems like a reasonable idea. Don’t get us wrong, jerky was designed so that it’ll last for a long time, and if you know you’ll finish that bag in a day or two (which, trust me, you probably will, even if you don’t think so), you certainly can leave it on the table.

But if you want an opened bag of jerky to last a week or two, you’re going to want to put it in the refrigerator.

Why doesn’t unopened beef jerky need to be refrigerated?

Unopened beef jerky doesn’t need to be refrigerated mainly because the way jerky is prepared leaves it with little to no moisture that bacteria need to grow. This applies to jerky in general, though.

So what makes unopened beef jerky so much durable? Besides the natural durability of jerky, it is the fact that there is no oxygen left in the packaging.

Does beef jerky need to be refrigerated after opening?

As we’ve touched above, jerky can last a really long time just because of its natural abilities that come from the way it is made – but since opening a bag of jerky allows it to interact with oxygen, it’s smart to put the unopened jerky package into the refrigerator.

That is especially true if you have a high moisture level jerky, which doesn’t have as much of those natural abilities mentioned in the last paragraph. A bag of that jerky will most likely even have “Refrigerate After Opening” written on it somewhere.

What happens if you don’t refrigerate opened beef jerky?

Simply put, if you don’t refrigerate opened beef jerky, it won’t last as long as it would if you did. That being said, you usually don’t need to worry about leaving opened beef jerky at your table because you’ll most likely eat it before it goes bad.

So if you make sure that your jerky isn’t the one with higher moisture levels, you don’t need to worry about anything bad happening if you don’t refrigerate it.

How long does beef jerky last when opened?

How long beef jerky lasts when opened depends on many things, including whether or not you put it into a refrigerator. But, generally speaking, we would say that an opened bag of jerky should be eaten within a week.

How can you tell if beef jerky has gone bad?

The easiest way to tell that your beef jerky has gone bad is the way it smells. Unfortunately, you can’t really tell anything about the state of your jerky by looking at it because beef jerky appears to look weird only when it starts to grow mold. So if you’re worried about eating the jerky, you already had for some time, just take a sniff, and you’ll know.

Does beef jerky go bad in the fridge?

Every food will go bad eventually, no matter if it is refrigerated or frozen. And beef jerky isn’t an exception; it’ll just take a long time.

And although that time can be prolonged by refrigerating it, your beef jerky will go bad even in the fridge.

How long does beef jerky last in the fridge?

This is a tricky question because how long your beef jerky will last in the fridge depends on countless things. You can expect it to last at least two weeks, though, and with most jerky, a month shouldn’t be a problem as well.

Does Buc ee’s beef jerky need to be refrigerated?

Remember the jerky with higher moisture levels we talked about? One of the most famous brands making these is Buc ee’s, so before we get into something slightly different, let’s discuss the jerky of theirs.

When we’re talking about an unopened pack of Buc ee’s beef jerky, everything’s the same as with every other jerky you can buy. Since there is no oxygen in the package, the higher moisture levels don’t matter, and you don’t need to refrigerate it.

They start to matter as soon as you open the package, though – when oxygen enters the game, an opened bag of Buc ee’s beef jerky doesn’t stand a chance if you don’t put it into the refrigerator.

Does homemade beef jerky need to be refrigerated?

In case you didn’t understand that everything we said up to now was about the jerky sold in stores. But how is it with the homemade beef jerky then? Let’s take a look.

Homemade jerky differs from the store-bought in both the way it is made and the way it is packed because you most likely aren’t able to dry it nor pack it as well as the manufacturers do it. Hence, your jerky will contain more moisture, and that there’ll be oxygen in the package.

So what does that mean? Well, basically that there isn’t any significant difference between an opened and unopened box of homemade jerky and that you should immediately put it into the refrigerator.

Does smoked beef jerky need to be refrigerated?

That especially applies if you decide to make your jerky in a smoker – even though this option is usually preferred regarding the taste and nutritious values, it is tough to make smoked beef jerky dry enough at home.

But that isn’t a problem, just remember to put it into the refrigerator, and you’re good to go.

Does ground beef jerky need to be refrigerated?

So yes, homemade ground beef jerky needs to be refrigerated if you’re not planning to eat it all at once.

Although the primary purpose of jerky is to have food that will last long enough on its own, using a fridge to store it may be a good idea. That is especially true while talking about jerky that has higher moisture levels.

That group includes not only jerky by brands like Buc ee’s, which leave more of the moisture in their jerky on purpose, but jerky made at home as well, since you probably won’t be able to get enough of the moisture out of it on your own. 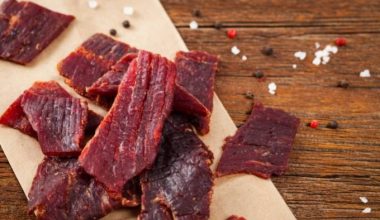 Read More
When someone mentions beef jerky, you probably think about the thin, absolutely dried pieces of meat you can…
FFood 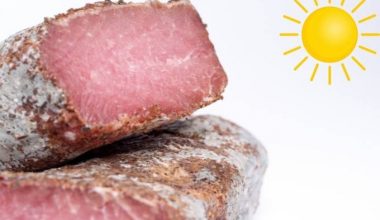 Read More
Jerky is one of the most popular snacks nowadays, especially in the USA, and it has been with…
FFood 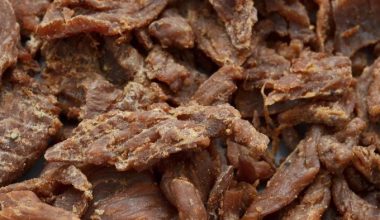 Read More
Have you ever smoked a big, fat joint, got hungry, found a nice bag of jerky, started enjoying…